PRESS RELEASE ON 5/1/13:  An early morning biosolids foam over event from the ATAD was completely contained within the newly constructed containment area at the City of Three Rivers Wastewater Treatment Plant.  The containment area was constructed by LD Docsa to serve as a final protective barrier to prevent biosolids foam from entering Lincoln St. and the storm sewer system.  The containment area which was just recently completed performed as expected and prevented the release of approximately 1421 gallons of foam into the street.  An automation system is in place to prevent high foam conditions within the ATAD; we are currently reviewing process specific set-points and will be making some tweaks to the automation.

PRESS RELEASE ON 4/29/13: The Sanitary Sewer Overflow (SSO) into the St. Joseph River that began on 4-21-2013 has been completely stopped.  City of Three Rivers DPS and WWTP crews were able to access the location this morning to make the confirmation.  Pipe flow capacity analysis and discharge estimates are still being worked on, but currently indicate that the overflow stopped on 4-24-2013 at 10:00 pm.  A final written report will soon be submitted to the MDEQ detailing the estimated volume of discharge, specific timeline of events, actions taken to reduce the impact of the discharge, and actions that will be taken to reduce the occurrence of future discharge.

PRESS RELEASE 4/22/13 UPDATE!! The City of Three Rivers Department of Public Services (DPS) placed a 30 inch diameter by 4 Ft tall concrete structure over the top of the discharging manhole at 09:00 am this morning (4-22-2013). Sand bags were then placed in and around the structure. The volume of the discharge was reduced to an estimated 25 gallons per hour. The total volume of the discharge is currently estimated at 20,825 gallons (as of 2:00 pm). The St.Joseph River is currently flowing at a rate of 3.0 billion gallons per day. 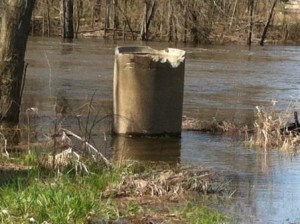 PRESS RELEASE ON 4/21/13: The sanitary sewer river crossing at Broadway St. in Three Rivers became overwhelmed due to flooding and began discharging sewage at a rate of 900 gallons per hour since 10:00 am on 4-21-2013. The 10 inch diameter line that conveys sewage under the river to the Constantine St. pump station is taking on water from the St. Joseph River. Wastewater treatment plant staff have been unable to stop the discharge. The Health Department has issued a no contact advisory for the St. Joseph River from Broadway St. south to the Constantine St. bridge. A follow up report will be issued when the discharge is stopped. Water quality data will be reported as soon as the results of the analysis are available. All sewage pump stations and the WWTP are in service with no problems to report and the WWTP is meeting all effluent parameters.