A delegation of community leaders traveled to AAM world headquarters in Detroit to say thank you to AAM president David Dauch for his commitment to the greater Three Rivers area.

On behalf of several leaders from the area, Joe Bippus and Christy Trammell presented both the Three Rivers plant manager and AAM president with plaques thanking them for the decision to invest in the Three Rivers facility and grow jobs in St. Joseph County. AAM will begin adding 20 jobs a week in an effort to grow their workforce by 450 people. This is welcomed news for an area that has high unemployment.

David Dauch began the meeting with a history of the company and the trajectory of upward growth until the recession and then a process of restructuring the business to stay competitive. It was at this point the company and its workforce made tough sacrifices in order to survive but those decisions are paying off today. The company is preparing profit sharing checks for its associates as well as projecting growth through new products and expanding markets.

Union leadership was at the table also during the meeting and highlighted the working relationship that they have with management in order to solve problems. All in attendance at the meeting recognized the sacrifices that the union members made and praised them for taking the long view of the economic situation. It is their efforts that have continued to make the Three Rivers facility a globally competitive place to manufacture products. David and the union agreed that their model for labor management relations is an example for other companies and unions to follow.

Each representative from the Three Rivers area discussed one aspect of how we are working together as a community to meet the needs of AAM and other businesses. Our discussion focused on education, job training, infrastructure, quality workforce, and inter-governmental cooperation.

David Dauch praised the community leaders for their forward thinking and cooperation. He also expressed his gratitude and appreciation for the meeting. It meant a lot to him to know that all the hard work, tough decisions and sacrifice on the part of so many people at AAM is appreciated. The company and its employees are committed to the Three Rivers area and want to remain a vital partner to the success of St Joseph County.

In attendance from the Three Rivers Area 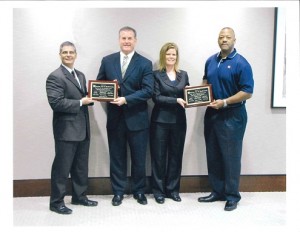