The Friends of Riverside Cemetery Inc. (FORCI) is working on a project to resemble the Civil War Memorial. It has been designed to be a large boulder surrounded by an 8 sided cement patio encircling the boulder. Four sidewalks will extend north, south, east and west, toward the 4 points of the diamond. The north and south sides will have marble benches. Document readers will be on the east and west sides of the viewing patio to highlight the history of Riverside Cemetery, the City, and its pioneers. The boulder will contain bronze plaques. One will list the founders of Riverside, and another will list founders of Three Rivers. An additional plaque may be added. 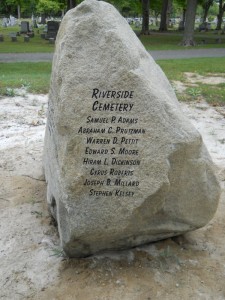 The FORCI is seeking input from the Armstrong family regarding the name of the memorial, wording of the plaque, and any other input they may have. 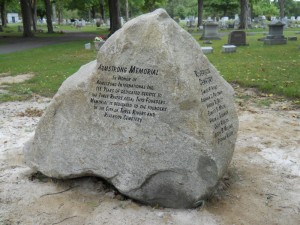 The projected cost is estimated between $8,000 and $12,000, with much of the work being done by volunteers of FORCI. No completion date has been set as the availability of money will dictate the final completion date. Fund drives will begin about mid winter 2011. The group has established completion steps for the project as money is obtained.