Cranwell’s Horned Frog, aslo known as the Pacman Frog, is a terrestrial frog from Argentina. Though generally inactive, they are aggressive eaters and are capable of leaping several body lengths in order to capture prey. They are carnivorous, feeding mostly on insects and animals similar in size them themselves. Our Eddie is 4 years old. He spends most of his time in his pond, made of distilled water and coconut husk bedding. 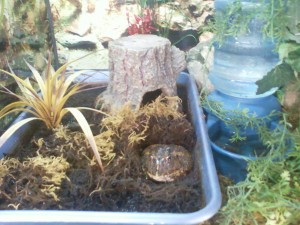