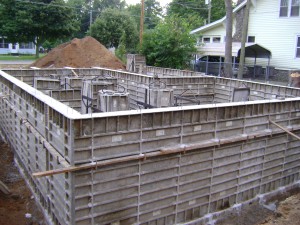 Even as the finishing touches are still being put on the new Neighborhood Stabilization Grant (NSP) home located at 918 Eighth Street, construction has already begun on the second NSP home in Three Rivers!

Footing and foundation walls were poured at the new home located at 701 E. Broadway the week of July 26. Framing will begin soon and construction is expected to be completed and the home ready for purchase and occupancy by early this Fall.

This new single family dwelling will be a two story, three bedroom, two and one-half bath, one car garage home complete with kitchen appliances and basement. With an estimated sales value of approximately $103,000.00 qualified eligible buyers could have up to 20 percent off the mortgage (approximately $20,600) forgiven over a 10 year period under the NSP program, thereby resulting in the estimated buyer cost of the home to be potentially as low as $82,400.00.

The NSP is part of the Michigan State Housing Development Authority (MSHDA) initiative to work in partnership with cities such as Three Rivers in redeveloping older residential neighborhoods. With two homes already under construction, the City has its eyes focused on building even more new homes in the near future.

Individuals interested in learning more about potential ownership opportunities of either of these two homes or obtaining construction status reports or future new NSP housing plans in the Three Rivers area should contact Marilyn Smith at (734) 341-1866.