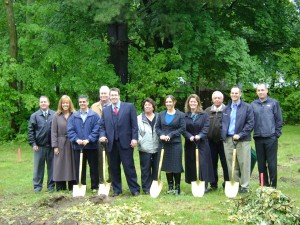 With a groundbreaking ceremony held at 918 Eighth Street, May 11 marked a day of continuing growth for the City of Three Rivers and its residents.

The groundbreaking is one of several that the City hopes to have in the near future. The home being built at 918 Eighth Street is a single family, two story, three bedroom, two car garage home complete with kitchen appliances and basement. Completion date is anticipated by mid to late summer. The estimated sales value of the home is $105,000. With up to 20% of the mortgage (approximately $21,000) forgiven over a ten year period under the NSP program, the estimated buyer cost of the home could potentially be as low as $84,000.

Individuals interested in construction status reports or in NSP home ownership opportunities in Three Rivers should contact Marilyn Smith at (734) 341-1866.